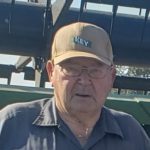 Wayne was united in marriage on November 27, 1965 to Lois Sittler and they spent the next 56 years together. Mr. Koni…read more

Wayne was united in marriage on November 27, 1965 to Lois Sittler and they spent the next 56 years together. Mr. Konicek was a member of St. Mary Catholic Church in Plano, IL. Wayne had farming in his blood and after a short time serving his country in the army farming became his life’s work.  Beyond farming, nothing brought him greater joy than playing cards and spending time with his grandkids and watching them grow-up.  He was a loving husband, father, grandfather, brother and uncle who will be deeply missed by his family and many friends.

He was preceded in death by his parents, Earl and Emma Konicek; his brother, Robert C. Konicek; and his brother-in-law, Don Weck.

A Funeral Mass will be held at 10:00 AM on Tuesday, May 17, 2022 at St. Mary Catholic Church, 1001 North Center Avenue, Plano, IL with Father Andy Davy, M.I.C., officiating. Interment will follow in St. Patrick Cemetery in Bristol, IL.

In lieu of flowers, memorials may be directed to St. Mary’s Church-building fund, The American Heart Association or The Kendall County 4-H Livestock Committee-scholarship program.

Help tell the story of Wayne's life by contributing to the Life Event Timeline. Upload the photo of an event...