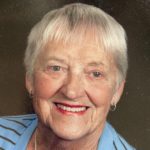 Born into poverty in an Irish tenement in Brooklyn, NY in 1920, Rita (Whitmore) Stofflet went on to enrich so many lives with her abundant humor during her 101 years.  Rita died September 10, 2022 at Golden Years of Lake Geneva, with family by her side.

Born into poverty in an Irish tenement in Brooklyn, NY in 1920, Rita (Whitmore) Stofflet went on to enrich so many lives with her abundant humor during her 101 years.  Rita died September 10, 2022 at Golden Years of Lake Geneva, with family by her side.

Reflecting on life at age 100, Rita said, “You experience all kinds of tragedies and good things, and you get your money’s worth. But I look at it, and I can’t believe it was as wonderful as it was.”

It didn’t start out that way. Rita remembers having little food as a child, “eating fried potatoes and onions night after night” made by her single mother, Ethel. Later in life, always a member of the Clean Plate Club, Rita would say, “I eat it all because I paid for it”, and “I like anything I can get for nothing.” (It’s even funnier if you imagine her quotes said with her Brooklyn accent.)

During the Depression, to give Rita a better life, Josephine and husband Andy took her in at age 13 and raised her. She remembered roller-skating through Brooklyn, earning hot lunches by escorting a student with disabilities to school on the subway, and taking a job gift-wrapping packages at Macy’s in Manhattan for $12.50 per week.

Rita said she even touched FDR’s cape at a speech in Brooklyn, and once babysat for gangster Jake “Legs” Diamond’s kids.  “They told me, keep the curtains closed.”

During WWII, she met the love of her life, Sgt. John W. Stofflet, at Fort Hamilton, NY, where she was a USO volunteer. One day her priest mentioned, “The USO is looking for nice girls to listen to homesick soldiers and dance with them at the Fort’.”

John was from Watertown, Wisconsin, and a member of the U.S. Army Port of Embarkation Band. They did dance and fall in love.  He proposed in the shadow of the Verrazzano Bridge, and they married in April of 1944.

Distance could not diminish Rita’s love for her NY extended family after she left. She loved them as much as she loved her hometown.  “I’m not from New York City, I’m from BROOKLYN!”

In Wisconsin, Rita continued her work as an executive secretary, eventually at United Way. She volunteered often at her children’s schools, always attending their events, and was Worthy Matron of the Walworth Order of Eastern Star in 1959.  She was named Volunteer of the Year in Highlands County, Florida for her work as a retiree reading to young children in schools. “Bigshot…dot the ‘i’”.

Her husband John died in 1995 after 51 years of marriage. “Why did he have to die and spoil the whole thing?” She eventually returned to her beloved Williams Bay, Wisconsin and Walworth County.

Rita had seven grandchildren–Jenni (Matt) Thompson, Jacki (Jeremy) Hogan, Ryan (Megan) Anderson, Max and Nick Morton, and Taylor and Kaia Stofflet. She had 7 great-grandchildren (Paige, M.J., Caleb, Will, Olivia, Evelyn, and Alayna).  “That’s a lot of kids.  Sheesh!  We must be Irish!”

She was thrilled to attend weddings of children and grandchildren, which couldn’t come too soon. “When are you getting married? Before or after I’m dead?”

Her faith and the United Church of Christ were very important to her. “Of course, I go to church. Someone has to save the rest of the family!”

Rita loved the holidays, especially as she approached 100.  “Sheesh! What’s that big box? My casket?”  “I’d better open my presents now. I might not be here next week.”

In Rita’s final years, she was so grateful to her many devoted caregivers at Golden Years of Walworth and Lake Geneva, as well as Aurora at Home Hospice. “They should have named you Grace…’cuz you’re amazing.”  “You’re really nice…and I’d say that even when I’m sober.”

Late in life, Rita was known to wag her finger when passing the funeral home, saying, “Not yet!”

She survived COVID at age 100.  As she faced death at age 101, Rita kept that sense of humor, remarking to the hospice intake nurse listening to her chest, “Is it still beating, or are you the undertaker?”  Despite health challenges (“I’m losing my voice. I’m sure that’ll make some people happy”), Rita persevered.

She was in awe each time you’d remind her she was a centenarian. “God, thank you. I didn’t think I’d make it this far!”

God, thank you for Rita Stofflet, the Belle of Brooklyn.  They should have named YOU Grace…’cuz YOU were amazing!

Family and a small circle of friends will gather to remember Rita someday soon.  If you’d like to honor her memory, please consider feeding other hungry children through Second Harvest Foodbank of Southern Wisconsin, or by donating to the Alzheimer’s and Dementia Alliance of Wisconsin, or the Badger Childhood Cancer Network.

Family and a small circle of friends will gather to remember Rita someday soon.  If you’d like to honor her memory, please consider feeding other hungry children through Second Harvest Foodbank of Southern Wisconsin, or by donating to the Alzheimer’s and Dementia Alliance of Wisconsin, or the Badger Childhood Cancer Network.

Help tell the story of Rita's life by contributing to the Life Event Timeline. Upload the photo of an event...

Cathy Burton Kirby posted on 9/23/22
Sending deepest condolences to the Stofflet family from the Gordon and Audey Burton family of Beaver Dam. I am their daughter Cathy and remember Rita well from her time in Florida at Avon Park. My folks lived just a few doors down from her for years. She and my mom had lots of laughs together, enjoyed spending time together and were good friends. When I would visit them down there, a visit with Rita was always on the agenda. She was such a fun, caring, wonderful person! Loved her quick wit and all her stories. My mom, Audrey, passed away 4 years ago but Dad is still around, at age 97, and he commented that she will beat "the old gang" from Avon Park, living to be 101, something I think Rita would be proud of......
Wilma Holstein posted on 9/17/22
I knew Rita throughout the '60's in Williams Bay - during which Rita became a wonderful friend. When we were "newcomers," she helped me fit into the town and the Church while we were living in what was then known as College Camp. Our four-family group was fun and our family loved when we got together. It made Williams Bay our favorite place to live--we moved a few times. I am the last of the four-group adults and I have great memories of Rita and the Stofflet family. Our loving sympathy to the Stofflet family. The Holsteins--Wilma-Steve-Alan
DARRYL DAVIS posted on 9/16/22
SO SORRY TO HEAR ABOUT THIS. I'M EVEN MORE SORRY I NEVER MET HER PERSONALLY BECAUSE I THINK US TWO PUNSTOERS WOULD GET ALONG GREAT! I SEND MY DEEPEST CONDOLANCES TO JOHN STOFFLETT, HIS FAMILY, RELATIVES, FRIENDS, OTHERS WHO HAVE KNOWN RITA STOFFLETT. REST IN PEACE. WELL DONE MY MIGHTY FAITHFUL WARRIOR. NOW GO TAKE YOUR PLACE AMONGST THE WORLD OF FAITHFUL WARRIORS. HOPEFULLY WE WILL MEET SOMEDAY. DARRYL DAVIS
Stanley Angell posted on 9/16/22
Rita,; Surely God is getting an Angel with big wings to continue your work of kindness. Thanks so much for all you and your husband, John Stofflet Superintendent, did for me as principal of Kromery Middle Scchool.Stan Angell
April Forsythe posted on 9/15/22
My sympathy to the Stofflet family. I really enjoyed your mom Rita. She was such a great loving lady. She sure knew how to make a person smile. A day never went by that I had told her how cute she was. She has such a wonderful family. I sure enjoyed seeing the family ever time you would come to visit. April Forsythe
Natalie Long posted on 9/15/22
My dearest condolences to the Stofflet family. Rita was a classy lady, sincere, thoughtful in many ways. She never had a bad word on nobody, I surely enjoyed taking care of her when I worked in Golden Years in Walworth. Truly a gem, was always happy to see me come in and see her. Very witty with her words, always made me laugh ( even when I had a bad day). When it was my last day of work, I told her that I had to retire, " she said: Your leaving us????? This place won't be the same. I kept my promise to see her after I left, until Covid hit, UGH!!! The Last time I saw her she didn't remember, than I knew that wasn't her anymore. Thankyou for giving me the opportunity to take care of her, it was a honor and privilege to do so. Love you all. My deepest sympathy.
Michael V COURT posted on 9/14/22
John So Sorry for your loss I may not have known your mom that well but from what I am reading in this Obituary I would have loved to have known her better very good touch with the humorous obituary it literally had me laughing so hard. Your mother had the same sense of humor that my granny had but my granny would say it with the western mountain girl accent and attitude your mom would have loved her, any Rest Easy Mrs. Stofflet you earned it prayers to you John and all of your family
Rita Hawk posted on 9/14/22
Sincere condolences for the entire family... but what an amazing woman, what a firecracker! Legend in life and I know who she's hanging with in heaven right now, and I think they had a heck of a welcome party for her. When I was younger our families did "round robins" on New Years Eve and I'm sure all of them are happy to see her again. I'm pretty sure I was named after her, so as her namesake, I will try to keep that Rita humor going on this end.
Sandy Rowin posted on 9/14/22
Thoughts and prayers to you and your family. What a wonderful tribute to such a wonderful lady. I never met Rita only thru posts her son posted on facebook when he would visit which was often. I was very lucky to hear the humor in your son's posts and see how much you adored him. Rita you will be missed by many. May God hold you in his arms and you will be everyone's Heavenly Angel.
‹ ›
View All Condolences Post a Condolence
Nelson Funeral Homes & Crematory