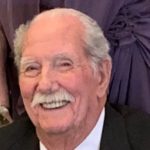 Richard Eugene Gilchrist, age 90, a lifelong resident of Waterman, IL passed away on July 29, 2020 at his home, surrounded by his loving family. He was born on February 15, 1930 in Waterman, IL the son of Alexander and Jeanette (White) Gilchrist. He was raised in Waterman and graduated from the Waterman High School in …read more

Richard Eugene Gilchrist, age 90, a lifelong resident of Waterman, IL passed away on July 29, 2020 at his home, surrounded by his loving family. He was born on February 15, 1930 in Waterman, IL the son of Alexander and Jeanette (White) Gilchrist. He was raised in Waterman and graduated from the Waterman High School in 1948.

Dick was united in marriage on March 3, 1956 to the former Miss Sandra George and they spent the next 64 years happily together. Mr. Gilchrist was a proud Veteran of the United States Army. He served over 30 years as the Post Master of the Waterman Post Office, until his retirement. Later he enjoyed working at the Indian Oaks Country Club until they moved to Tucson, AZ for 13 years before returning to reside once again in Waterman. Dick was a loving husband, father, grandfather, great-grandfather, brother and uncle who will be deeply missed by his family and friends.

He was preceded in death by his parents, Alexander and Jeanette Gilchrist; his brother and sister-in-law, James and Alma Gilchrist; and his sister and brother-in-law, Beth and Claude Workman.

A Celebration of Life for Richard will be held at 4:00 PM on Saturday, July 31, 2021 at the Nash-Nelson Funeral Home, 1001 East Garfield Street, Waterman, IL. Interment will be private.

Friends may visit from 2:00 PM until the Hour of Service on Saturday, July 31, 2021 at the Funeral Home in Waterman, IL.

Help tell the story of Dick's life by contributing to the Life Event Timeline. Upload the photo of an event...

Howard "Woody" Jones posted on 8/15/20
My favorite memories of Mr. Gilchrist (Dick) was stopping by the post office everyday to get the mail and especially when I was in high school ag class and I was awaiting receiving a shipment for my ag project. The high school office received a call from Mr. Gilchrist and he more than asked but demanded that Woody Jones leave school and go directly to the post office and get 6 shipments of honey bee's out of the post office. He did not want to take a chance of the bee's getting out of their cages! He was a fine man.
Wendy "Tuma" Struck posted on 8/4/20
Gilchrist Family, I was sorry to learn of Dick's passing. May God comfort you at this difficult time.
Angela Matheny posted on 7/31/20
So sorry for your loss. Sending prayers to the family.
Dawn Chesher posted on 7/31/20
I am very sorry to hear of Dick's passing. I did not know him well, but know he was loved by my family. Keeping his family in my thoughts. I hope the wonderful memories of him, help comfort you and ease the pain of losing a loved one.
Barb Thurlby, Matt & Amy Strausberger posted on 7/30/20
My deepest sympathy at Dick’s passing. What great memories we have his great sense of humor and caring spirit. He was indeed a special guy. Rest In Peace my friend, and welcome home.
Rick Brown posted on 7/30/20
Brenda and I have fond memories of meeting Dick and Sandra at Gary and Cheri’s home for “pizza night”! We enjoyed the wonderful and warm conversation. Our prayers are up for Cheri and her precious family....
‹ ›
View All Condolences Post a Condolence
Nelson Funeral Homes & Crematory