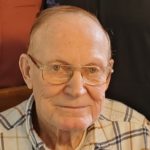 Paul was united in marriage to Phyllis Joanne “Jodie” Shuck on June 22, 1951 in DeKalb, IL and spent nearly…read more

Paul was united in marriage to Phyllis Joanne “Jodie” Shuck on June 22, 1951 in DeKalb, IL and spent nearly 67 years together raising a family and loving each other immensely.  He graduated from Somonauk High School in 1949.  After marrying Phyllis, they moved to California where Paul served in the U.S. Army National Guard. They soon returned to Illinois to begin their married life where they had 4 beautiful red head daughters.

Paul started farming on his return to Illinois and then soon became an apprentice bricklayer.  He soon learned his trade and became a bricklayer.  He worked on many of the buildings at NIU as well as brickwork for many others in our community.  After his retirement from bricklaying he worked for a local farmer in the spring and fall going back to his roots of loving to farm.

He and Phyllis loved going to Las Vegas every year to have fun watching shows and playing a little bit on the slot machines.  The grandkids loved getting them both to play a hand of 500 or Euchre.  Paul cherished his grandchildren and great grandchildren.  A smile always came on his face when they were around.  He also loved his Bengal cats, Shorty and Missy.  They were a great joy in his life.

He was preceded in death by his wife Phyllis Shuck, his daughter Paula Coe; his grandson, Jordan Hays; son-in-law Jesse Bittner; his brothers Robert, Ralph, Raymond and Fred; his sisters Helen and Gertrude.  He joins the angels watching over the rest of us.

Interment will follow in the North Clinton Cemetery in Waterman, IL.  A luncheon will be served at the Nelson Funeral Home after the internment.

Help tell the story of Lucky's life by contributing to the Life Event Timeline. Upload the photo of an event...

Becky Shuck posted on 9/20/22
Remember all those years of going back for family reunions. Getting to see everyone and visiting at everyone's home. Picking corn until a snake was seen. The train ride at the park. Love all of you and Uncle Paul please give my love to my mom and dad.
Bill meredith posted on 9/20/22
So sorry hope we can make it Sunday
Nyla Hunt posted on 9/18/22
So sorry to hear of Lucky's passing, but now he is reunited with Jodie. Many fond memories of times spent with both of them. They were a wonderful couple and he will be missed by many.
‹ ›
View All Condolences Post a Condolence
Nelson Funeral Homes & Crematory