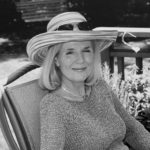 Patricia “Pat” (nee Gardiner) Baldwin, aged 93, passed away on December 9, at home. Adored wife of Richard H. Baldwin for 55 years, who passed in 2017, Pat is survived by her remaining siblings Robert (Ellen) Gardiner and Dinah (Allen) Downs, and children Sarah (Michael) Tesch; William (Kristina) Baldwin; Anne (Karl) Eckardt; and Claire (James) Krzyzewski. She was very proud to be known by her grandchildren as Gorgeous or Gigi, and they include Scott and Nicole Welling and step grandchildren Billy and Leah Tesch; Sam, Lily and Tommy Baldwin; Cooper and Luke Eckardt; and Charlie and Henry Krzyzewski. The daughter of Kathleen (nee Mahoney) and Harold Wirt Gardiner, Patricia was born in 1928 in Oklahoma City, OK. Like many families in the depression era they moved frequently and Patricia lived in Oklahoma, Maryland and Florida before the family landed in Milwaukee when she was in college. She was the eldest of 5 children and decided the fastest way to get out of the crowded house was to graduate high school and go to college at 16. She attended University of Oklahoma for a year then transferred to University of Wisconsin-Madison where she would finish her degree in Economics in 1949. She began her career in public relations and marketing in Milwaukee and by 1954 was living in Chicago on Lake Shore Drive after accepting a position with the Commerce and Industry Association of Chicago.  She married Richard in 1962 after 3 months of courtship and they went on to have a long and happy marriage. Patricia was always a savvy business woman and after helping in the family business for years, she transitioned to a new career in commercial real estate where she excelled, becoming a top producer and partner at Paine Weztel for many years until her retirement in 2013. At 80, she still looked like a woman in her mid 50’s and was quite proud of her young appearance and fashion sense. Patricia maintained a select few deep friendships:  Harriet Ellis was her protege, friend, and “sister” for almost 60 years; Chicago columnist Maggie Daley was a dear friend; Bill and Mary Frances Veeck were frequent fixtures; and the Peoria Eagletons enjoyed legendary vacations with Richard and Patricia. There are many ways to remember Patricia: chocolate lover, amazing fashionista, hospitable home entertainer and party planner with a beautifully set table, artistic, always immaculate in appearance and manners, and a fantastic cook. Her children will remember her as as mom who loved in her own way and she will be missed greatly. Patricia called the shots in life, and as such she expressed her preference to have a party, not a funeral. A memorial celebration is being planned. Arrangements by Nelson Funeral Homes & Crematory, www.NelsonFuneralHomes.com or (630) 553-7611.

Services will be private.

Help tell the story of Pat's life by contributing to the Life Event Timeline. Upload the photo of an event...

Be the first to share a memory of Pat.