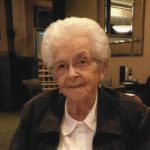 Marion was united in marriage on October 19, 1947 in Hart, MI to Mr. Donald R. Lake and they spent the next …read more

Marion was united in marriage on October 19, 1947 in Hart, MI to Mr. Donald R. Lake and they spent the next 53 years happily together until his passing on April 20, 2001.  Marion and Don enjoyed traveling on their motorcycle thru-out the United States. She enjoyed a variety of activities including, quilting, knitting and crocheting, crafting, square dancing and outdoor camping with her family. Marion will also be remembered as an avid animal lover. She was a loving wife, mother, grandmother, great-grandmother, sister and aunt who will be deeply missed by her family and friends.

She was preceded in death by her parents, Niles and Hilda Woodin; her husband, Donald R. Lake; and her 14 siblings.

A Funeral Service will be held at 10:00 AM on Monday, April 26, 2021 at the Nash-Nelson Memorial Chapel, 141 North Maple Street, Hinckley, IL. Interment will follow in the West Big Rock Cemetery in Hinckley, IL.

Help tell the story of Marion's life by contributing to the Life Event Timeline. Upload the photo of an event...

Be the first to share a memory of Marion.