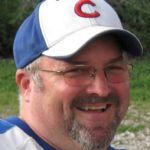 Gregory Paul Kraber, 61 of Yorkville, IL passed away unexpectedly on Thursday, February 11, 2021 at Rush Copley Medical Center in Aurora, IL surrounded by his family. Greg was born on May 26, 1959 in Berwyn, IL to Paul and Sue (Kaster) Kraber.

Greg was united in marriage to the love of his life, Julie Smith and they…read more

Gregory Paul Kraber, 61 of Yorkville, IL passed away unexpectedly on Thursday, February 11, 2021 at Rush Copley Medical Center in Aurora, IL surrounded by his family. Greg was born on May 26, 1959 in Berwyn, IL to Paul and Sue (Kaster) Kraber.

Greg was united in marriage to the love of his life, Julie Smith and they spent the next 41 happy years happily together. They had four children, Adam, Tiffany, Ashley and Kyle Kraber. Greg was a long time member of St. Patrick Catholic Church in Yorkville, IL.

He was a graduate of Yorkville High School Class of 1977 and was considered a hometown celebrity his Senior year “last at-bat” for a called home run shot. He was a self-proprietor of Kraber Carpentry, OJ’s Tap and Plano Recreation, for many years. Later in life, he enjoyed working with two close friends at S&K Excavating and TBS Construction. Greg was one of the founders and first president of the Yorkville Hometown Days Event. In his later years, he enjoyed his retirement time at Bristol Tap and at the Smith Family Lake House, where he frequented Mickster’s Pub, always having time for “one quick one”! Most of all, he enjoyed anytime or mischief he could get into with his grandchildren, Rachel, Carter, and Kelsey. Greg idealized his Papa as a child and he filled those shoes as Papa himself. His three grandkids now idealize him forever in their hearts. To his grandkids, he appeared larger the life, as most that knew him would undoubtedly agree!

In death, he is reunited with those he loved so much, his Kraber and Kaster Grandparents; his in-laws, James and Dorothea Smith; his great uncles, James Kraber and Don Kraber; his aunt and uncle in-laws and many close friends.

Forever remember Greg Kraber when you hear Go Cubs Go!! A true one of a kind!

Help tell the story of Gregory's life by contributing to the Life Event Timeline. Upload the photo of an event...

Pat & Nancy ❤️ posted on 2/26/21
Stunned and devastated to find this world has lost a loyal, kind, caring and funny man. Greg always had a smile on his face and a smart, funny remark to make. He was larger than life. Loved, and lived life to the fullest. Gargantuan CUB’S fan. All things CUB’S! He believed in every soul. Greg loved and was loved by many. Pat and I have lost a little piece of our hearts and one of our dearest friends, Greg. Sure he started right at the gate making new friends and making them laugh. Heaven will be loving the CUBBIES soon! Julie and family, we share your sorrow. We will however, celebrate Greg’s life too. Wishing you many blessings. Love you all...
Rick Johnson posted on 2/19/21
My condolences to the Kraber family. I'll always remember Greg as someone who wrung the most out of life and didn't wait around for something to happen, but made it happen! He was always generous and gracious with my folks at Pine Lake and I will always be grateful to him for that. I will raise an Old Style (or two) in Greg's honor and toast him and his memory at Pine Lake. Safe travels Greg and peace to the family. Rick Johnson
Jack, Heather, Cory, and Tyler Westphall posted on 2/17/21
Dear Julie and Family, We are very sorry for your loss. Greg's smile would always light up any room that he was in. We always knew that Greg would stand up for what was right and he was a true friend too many. Please know that we are here for you and your Family. Our Deepest Sympathies, Jack, Heather, Cory, and Tyler Westphall
Andy&karen Kraber posted on 2/16/21
Julie and Family - we are sad to hear of the loss of Greg. Though we only met a few times at the Kraber reunions, i knew by our conversations that he was an incredible person. We will be in prayer for you and our family and hope to see you all in the near future.
Ralph n Joy chandler posted on 2/15/21
Our Heart goes out to all of you for your loss , we really never knew Greg Kraber ... But we heard of him through his grandchildren. Rachel ,Carter and Kelsey they spoke of there papa often I could hear the love in there voices ..so I knew in my heart he was a great papa .. I am a forever friend to Kari and Adam and there 3 kids I took care of there sweet kids Love and prayers to all of you over the loss of your Dad and Papa.. Julie I am so sorry over the loss of your Soul Mate Love and prayers sent your way
Frank & Carol McKeever posted on 2/15/21
We were so sorry to read of Greg's passing. He was a very enjoyable one-in-a-million and we know he will be missed by so many. Our hearts go out to Julie and family.
Laura Osborne posted on 2/15/21
His constant infectious smile and booming personality will forever remain with us.
Laura Osborne posted on 2/15/21
Forever in our hearts
Victor & Chandra Godinez posted on 2/15/21
We are so sorry for your loss. Our deepest condolence! Your family is on our thoughts and prayers. ❤
Michelle Hood posted on 2/14/21
One year he drove use to the airport to go to a wedding and it was cold. He also pick use up in the snow ⛄️ and I was real happy he did. He always had a smile when I saw he. He will be missed but always in your hearts
Kathy & Steve Kraber posted on 2/14/21
We are so sad to hear about Greg. We enjoyed our time visiting with all of you during our family reunions. Our family reunions will never be the same. Wish we could be there but with the weather conditions and Covid we can’t make the funeral, but our thoughts and prayers are with you all. RIP
Leroy Richmond posted on 2/14/21
Rest In Peace Babe, you will be missed -Leroy
Greg and Courtney Freeman posted on 2/13/21
Greg and I are keeping your family in our thoughts and prayers. May God be with you through your grief and healing. If you need anything at all, please let us
Timothy & Colleen Brummerstedt posted on 2/13/21
Greg was a incredible person. He could negotiate any deal, sweet talk anyone , make everyone his friend. The world lost a great man. So sorry to see you go Greg.
Vicki Cosma posted on 2/13/21
To Julie and family, You all are in my prayers at this sad time. Greg was instrumental in our kitchen remodel. It couldn't have been done without his expertise and hard work. But my favorite memory of Greg has to be the time he kept kidding me about him taking my on that famous Cubs motorcycle. To the amazement of all, I went for a ride. It was great! He was a special friend to my family. Rest in peace Greg.
Bob Carlson posted on 2/13/21
Bob and Nancy Carlson wish to extend our deepest condolences to the entire Kraber family. We enjoyed knowing Greg and working with him to build out Dick and Bobbie's basement. We remember his humor, his great food and his willingness to help where needed. He will be missed.
‹ ›
View All Condolences Post a Condolence
Nelson Funeral Homes & Crematory