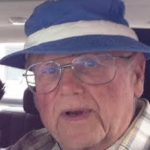 The family of retired pastor, Gerald James Holz, sadly reports his passing on Wednesday, December 22nd, 2021, at his home in Sharon, WI. He was 86 years old.

Gerald was born in Milwaukee, April 20, 1935 to Raymond and Florence (Politoski) Holz. His parents and one sibling, Joyce Neumann, preceded him in death.

The family of retired pastor, Gerald James Holz, sadly reports his passing on Wednesday, December 22nd, 2021, at his home in Sharon, WI. He was 86 years old.

Gerald was born in Milwaukee, April 20, 1935 to Raymond and Florence (Politoski) Holz. His parents and one sibling, Joyce Neumann, preceded him in death.

After graduating high school, Jerry served two years in the Army, stationed in Germany. Returning to Milwaukee after his military service, he married his high school sweetheart, Joan, July 20, 1957.

Gerald began a banking career, becoming a Vice-President of First Federal Savings and Loan. After more than a decade in the banking industry, Jerry felt another calling…to become a pastor. In a true leap of faith, Gerald and Joan relocated with their five children to St. Paul, MN, where Jerry attended Lutheran seminary school.

Upon his graduation in 1976, Gerald served two churches in Alvarado, MN followed by two in Iola, WI. Though Gerald never lost his love of finances, guiding his family in these matters, he truly excelled as a leader of his faith. In addition to performing marriage ceremonies, confirmations, baptisms, and ministering to the sick with home visits, in his decades as a pastor, Jerry delivered thousands of sermons, making a special point to engage the children. Every Sunday, he called the youth of the parish to gather around the pulpit and spoke of the word of Christ…sometimes with puppets.

Gerald’s final years were spent in retirement with Joan in Sharon, WI, faithfully celebrating their monthlyversaries. At the time of Gerald’s passing, the devoted pair had celebrated 773 monthlyversaries over 64 years of marriage.

Gerald passed comfortably, peacefully in bed. Because was able to remain at home, the family would like to extend special thanks to Mercy Home Health and Hospice.

A private memorial will be held in Gerald’s home for close family members who’ll be sure to remember his effortless laugh, sometimes turning into tear-streaming belly laughs. And his special rhymes, concocted specially for birthdays and holidays. He’ll be remembered for his love of sports–The Packers, The Brewers, and the Milwaukee Bucks, his love of music–especially playing the accordion–his life-of-the-party sociability, his deep and abiding faith in God and humanity. And above all, he’ll be remembered for his unconditional, unfailing love.

In the Spring, a further service, for interment of ashes, will be held at Forest Home Cemetery, Milwaukee, date to be determined. Updates will be posted on Gerald’s “In Memoriam” page on Facebook:

In lieu of cards, flowers, or donations, we welcome your shared remembrances or condolences on this page.

A private memorial will be held in Gerald’s home

Help tell the story of Gerald 's life by contributing to the Life Event Timeline. Upload the photo of an event...

Don Mathsen posted on 1/17/22
I have many great memories of Pastor Holz' time in the two Minnesota churches - Bethlehem (Alvarado) and Kongsvinger (rural Oslo). Pastor Holz was a compassionate individual. The Holz family was active in the community. In addition to being my pastor, we spent many hours on the racquetball court keeping each other in physical shape. He usually won. During the summer, Pastor Gerry was the pitcher on the Alvarado community softball team. God's Peace to the Holz family during this time of loss.
Rhonda Heyd posted on 1/7/22
I know I speak for my entire family when I say, our sympathies to all of the family and friends of Pastor Jerry. We live next-door to their family in Alvarado Minnesota.
‹ ›
View All Condolences Post a Condolence
Nelson Funeral Homes & Crematory