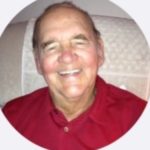 Franklin C. Beckley, age 89 of Yorkville, IL passed away on Tuesday, January 10, 2023, at Rush Copley Medical Center in Aurora, IL. He was born on April 7, 1933, in a farmhouse near Rossville, IL, the son of Madeline and William Beckley.

Franklin C. Beckley, age 89 of Yorkville, IL passed away on Tuesday, January 10, 2023, at Rush Copley Medical Center in Aurora, IL. He was born on April 7, 1933, in a farmhouse near Rossville, IL, the son of Madeline and William Beckley.

He graduated from Rossville High School in 1951 where he played basketball and football.  From 1953 until 1955 he served in the United States Army as a military policeman. Frank spent nine months in Korea and was honorably discharged.  On July 1, 1956, he married Ann Chandler, and they spent many happy years together. They raised three daughters, Brenda, Teresa, and Diana.  Frank worked at Caterpillar for 32 years where he retired as a general foreman.  Frank and Ann loved to play golf.  In his younger days, Frank loved to fish and hunt. For many years he would spend a week fishing in Canada.

He is preceded by his wife, Ann Beckley; his parents, William, and Madeline Beckley; his sisters, Rebecca Shepherd and Virginia Graham.

Jeannie Lusk Zollar posted on 1/17/23
Dear Brenda, Teresa, and Diana, I'm so sorry to hear of your dad's passing. Randy let me know as he noticed the gravesite at the Rossville cemetery. It is so sad that we are at the stage in our loves that we lose our parents and are now the "oldest generation" in our families. It was such a wonderful thing that our parents were able to keep up their friendship through all these years. I always enjoyed the times your family would come down here to visit your grandparents and we were able to hang out and visit and browse the shops uptown. Please know you girls and your families are in my thoughts and prayers. Love to you all!
Jeannie Lusk Zollar posted on 1/17/23
Dear Brenda, Teresa, and Diana, So sorry to hear of your dad's passing. Sad to say we are at this time in our lives that we are now the oldest generation in our families. We can all say that our parents lived long full lives and isn't it something special that they kept up their friendship throughout all these years! It was always a fun time when your family would come down to Rossville to visit and we could hang out, visiting and going through the shops uptown. Please know that you and your families are in my thoughts and prayers. Love you girls!
Nanacy Van Son posted on 1/13/23
To Frank’s wonderful daughters, Diana, Teresa and Brenda with their equally amazing husbands and families, Gene, Jake, Jon, Josh and I, Nancy, are sending our deepest heartfelt sympathy to all of you at this difficult time. While we never want to let our loved ones go, we treasure the knowledge that Frank is with our Savior and free from the physical pains of this world. Our faith in God helps with the loss of Frank, here with us, but in the joy that our faith brings is the knowledge that he is where we all hope to be someday sure helps! Frank was such a very good man. He was so hardworking and giving. Even in pain, he did so much for others, especially our mother. When asked how he was doing, he often responded first with a small laugh, as though unwilling to let on how bad the pain really felt, then acknowledge that it was not so good. He was so wonderful to my mother. The highlight of her days was knowing Frank cared for her, worried about her, played cards with her and just a couple years ago gave her a real good competitive game of ‘bags’. She loved how he called her every morning. My mother cared for him deeply and we worry how she will be without him. Frank was always so thoughtful and kind to everyone in our family. He was so very appreciate even of small gestures. He would call to thank us for remembering him with a card on his birthday or Christmas. How could we not??? Our thoughts and prayers are with all of you at this time. Your loss is heavy but your memories will lighten your heart. God gives us many treasures to hold and enjoy here. Frank was certainly one of them. They are not the treasures you can buy but treasures that lighten your heart and spirit, by the joy and love they added to our lives. All of our lives are richer for having known Frank. God Blessed Frank with such a wonderful family. I know this because Frank said so, many times!!! Just kidding, when he spoke of his family, it was with loving pride and smiles that showed in his eyes! He was fun! God Bless all of you. You are in our prayers. I have attached a picture taken at mom’s 90th surprise birthday party. Frank got her there and she didn’t have a clue! He was thrilled to do it for her. God love you Frank! You will be missed by all of us! (picture could not be posted but I mailed this letter and picture to each of his daughters) With heartfelt sympathy, The Van Son’s Gene, Nancy, Jake, Jon & Angela, and Josh (Lucille's oldest daughter)
Mark Johnson posted on 1/12/23
Enjoyed your friendship over the years! You were a great mentor back in the 1970's at Cat, RIP my friend...
‹ ›
View All Condolences Post a Condolence
Nelson Funeral Homes & Crematory