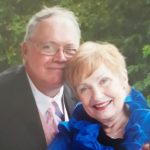 Adele Reedy, age 71, of Sandwich, IL passed away on Friday, July 29, 2022 at Kishwaukee Hospital in DeKalb, IL. She was born July 10, 1951 in Lake Forest, IL the daughter of James Donald and Mary Veronica (Harding) McCaffrey.

Adele was united in marriage on October 19, 1974 to Daniel Reedy and they spent the next 47…read more

Adele Reedy, age 71, of Sandwich, IL passed away on Friday, July 29, 2022 at Kishwaukee Hospital in DeKalb, IL. She was born July 10, 1951 in Lake Forest, IL the daughter of James Donald and Mary Veronica (Harding) McCaffrey.

Adele was united in marriage on October 19, 1974 to Daniel Reedy and they spent the next 47 years happily together. Mrs. Reedy was a member of St. John the Baptist Catholic Church in Somonauk, IL. Adele received her B.S. degree from Illinois State University and her M.S. degree from Aurora University. She first taught students at the Blind & Partial Sighted in St. Joseph, IL. Adele was then employed as a second grade teacher in Bethany, IL and later was a special education teacher in Sandwich, IL until her retirement. She enjoyed teaching and spending time with her children and grandchildren. Adele was a loving wife, mother, grandmother, sister, aunt, and teacher.

She was preceded in death by her parents, James Donald and Mary Veronica McCaffrey; her sister and brother-in-law, Susan and Don Drasler; her brother-in-law, Jehan Kavoosi; also her father and mother-in-law, T.L. and Wilma Reedy.

Gary and Willa Bretthauer posted on 8/4/22
Dan, sorry to learn of Del,s passing. It seems like yesterday that we were we welcoming you and Del to Kendall County. Time sure flies .Always remember the good times.
Fran Ehredt & Family posted on 8/3/22
To The Reedy and McCaffrey family. We are truly sorry for the loss of Del. I'm so glad over the years my whole family had the pleasure of getting to know Del. Our deep friendship with the Leviton family is our connections. She has always been a kind and gentle soul. So many found memory's over the years. May your happy memories give you peace and comfort during this challenging time. We wish we could have been there today. Just know your all in our prayers. Fran Al Ehredt
Steve and Debbie Wall posted on 8/2/22
Dan, we are so sorry to hear about Del. She was always the life of the party, full of energy, smiles, and laughter. Del's passing brings back wonderful memories of the many good times we experienced with the Reedy's. Many I wouldn't want to put into print. Our prayers and condolences are with you and the kids in the days ahead.
Sue Johnson posted on 8/1/22
We are so deeply sorry to hear about Adele passing away. We didn't know her. Sounds like she was a wonderful lady. Our thoughts and prayers are with you all. Sincerely-Vernon and Sue Johnson.
Suellen Reeder posted on 7/31/22
Dan, we were so sorry to hear about Del’s passing but know she is finally at peace and out of pain. We’re thinking of you and your family and know our prayers our with you. Love, Jim “Squirrel” & Suellen Reeder
Marge Overlot posted on 7/31/22
Del was the best teacher I ever taught with. Her determination, personality, love of teaching, sharing ideas, ... just everything was delightful. I remember when she first got pregnant how happy and excited she was. On the front of a shirt she wore was the word 'BABY.' And for reasons no one would understand with the exception of the teachers she taught with, she wore that shirt a lot of times, even washing it in the evening and wearing it the next day. She had amazing ideas, and had the courage to bring the ideas to light. She loved her husband and shared stories with us prior to moving to Sandwich where Dan got a great job. Though Del moved many years ago from teaching at Bethany Grade School, she will never be forgotten for living her faith and for her love of life. I pray God has received her with the same joy she brought to all of us here.
Chris Clampitt posted on 7/30/22
Dan and family, my heartfelt sympathy goes out to each of you. The rational side says "she is no longer in pain". The emotional side says "the sadness is real". The spiritual side says "she will always be with you". Take comfort in your love for Del and for each other. Her light shines bright through you.
Marilyn jenaen posted on 7/30/22
.my conolencrs
‹ ›
View All Condolences Post a Condolence
Nelson Funeral Homes & Crematory