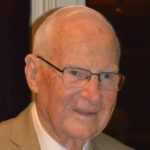 Jack graduated eighth grade from a two room school and went on to attend Saint Mary’s High School (now Catholic Central High School) in Burlington, WI. where he graduated in May of 1944 as President of the Senior Class. After graduation he returned to work in the family business, a general store started in 1922, Kansasville, WI. It was here that he received his education and training to run the grocery business. In 1960 he and Kay started Daniels IGA in Walworth, WI.

June 1979, his son Terry came back into the business, now Daniels Sentry Foods, Inc., and a second market was purchased in Janesville, WI.

Jack had a passion for the work he did and for the customers that supported his business. He stayed current with the latest products and services in the industry and wherever he traveled he would always visit the grocery stores to see their market and merchandise. In the late 1980’s he accompanied former Governor Tommy Thompson’s Trade Mission to Japan just to visit the super markets.

And though Jack retired in 1991 selling the corporation to his son Terry, the passion for the business never left him. Grandsons, Blake and Tyler joined the the family corporation 2011 and 2012 respectively, making it a 4th generation organization. Next year, 2022, the Daniels Foods Inc. will celebrate 100 years of business.

Jack was a man of deep faith that began early in his life and grew deeply throughout his 94 years. He was a lifelong member of the Knights of Columbus and Past Grand Knight; Past President of Catholic Social Service, Kenosha, WI; Past President of Catholic Social Services-Archdiocese of Milwaukee. Active in his home parish, St. Benedict as a Lector and Acolyte and also a Lector at his last parish St. Cecilia, St. Paul, MN.

He was committed to service not only in his church but for community and country. He served in the U.S. Navy, 1945-1946; In his early years he was a Volunteer Firefighter for the Kansasville Fire Department; Past President of the Walworth Chamber of Commerce; Board of Directors for the Village of Walworth Industrial Development Corporation, 1960-1970’s; Part of the business team to help assist Kikkoman Foods gain approval to locate in Walworth, WI; Board of Directors Walworth State Bank, 1977-1993; Member of Big Foot Country Club, 1976-2016.

His love of family and friends was first and foremost in his life. It brought him great joy to spend time with his large extended family and the many, many friends over the years. He gathered new friendships throughout his life and wherever he went.

Help tell the story of Jack's life by contributing to the Life Event Timeline. Upload the photo of an event...

Clara Jacobs posted on 7/19/21
So sorry to hear of Jack's passing. We have special memories of gathering in the North Woods. Our thoughts are with you. Tom and Clara Jacobs
Bruce Borrud posted on 7/16/21
We have great memories of Jack at Chaparral Country Club. He was very active in the golf program and a wonderful friend. He will be missed, but his legacy lives on. Good Bye good friend. Bruce Borrud
Jill Brogan posted on 7/16/21
A Gentleman’s Gentleman! He will be missed by his Chaparral friends
Michael Benner posted on 7/12/21
Our condolences to the family of Jack. “May the souls of the faithful departed, through the mercy of God, rest in peace. Amen.”
Jane (Martin) Molls posted on 7/8/21
Terry and Kathy: I really liked your dad. He was a great person to work with at Sentry as a high school student. My mother told my children “Jack Daniels is my best friend” They still smile at that. Mom meant it.
Don Ceschi posted on 7/8/21
I'd like to extend my deepest sympathy to the Daniels family. I knew Jack for a long time and I always had the utmost respect for all that he accomplished. He was a GREAT man!
Russell Ceschi posted on 7/8/21
To the entire Daniels family ,I want to extend my deepest sorrow for your loss. Jack was a great man in so many ways. He will be missed, but he's in a greater place. God Bless Him.
Rosemarie Buntrock posted on 7/7/21
It’s with much sadness Dean and I acknowledge the passing of a person we’ve always known as a gentleman. God’s blessings to everyone in the DANIELS family during these days ahead. Rosemarie and Dean Buntrock
Jane Chana posted on 7/7/21
My cousin Bill Kingore told me about your father. I’m So sorry to hear about his passing. Jane ( Rudolph) Chana.
Carolyn A. Warfield posted on 7/7/21
We wish to extend our deepest condolences to the family of Jack Daniels. What a wonderful man he was and so much fun to see him in the Walworth store and always chat with him then. He was so friendly and interested in what you were looking for with his help always. May God bless him in heaven now and forever. John and Carolyn Warfield of Walworth
Rick & Rose Crandall posted on 7/7/21
Dear Terry, Debi and you’re family, We are very sorry for you’re loss our thoughts and prayers are with all
Chuck Huettig posted on 7/7/21
My thoughts and prayers go out to the entire family Jack was a great man
Tom Kwiatkowski posted on 7/7/21
Dear Terry, Debbie and family, just read about the passing of Jack. What a community treasure! He was bigger than life in Fontana and Walworth, a hard working regular guy who set a high standard. You have to be so proud to have the family name Daniels. Barb and I are saddened but the legacy of Jack Daniels is passed on to others. God bless Jack, sincerely,Tom and Barb.
‹ ›
View All Condolences Post a Condolence
Nelson Funeral Homes & Crematory